What is a computer keyboard?

Computer keyboard is a device used to enter data and commands to a computer. Here are some facts you should know about this part of a computer.

What is a computer keyboard?

It is one of the most important parts of a computer which is used to enter commands, text, numerical data and other types of data by pressing the keys on the keyboard.

A user talks with a computer through input devices such as keyboard and mouse. Input devices are used to enter data to a computer. The entered data then converted into machine language so that a CPU understands the data or instruction comes through the input devices. 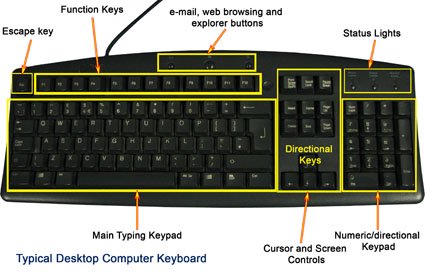 Computer keyboard comes in several type and variation, however, the basic elements are the same in all keyboards.

The most common types include

Commonly, a keyboard layout type which is called QWERTY (takes its name from the first six letters of the typing keys) is used widely for English language keyboard.

Basically, all keyboards have the following parts:-

It looks and arranged like a traditional typewriter where you press alphabetic keys. It holds alphabetic character such as letter, special characters and numbers. This is the area you use mostly when you do word processing.

The functions keys are located at the top of a keyboard and grouped into four. There are 12 functions keys starting from F1 through F12. These keys are used for special purposes and most programmers use these keys to do a specific task.

These keys used differently again in other applications, for example, if you are a user of AutoCAD, pressing F2 will display AutoCAD text window.

Similarly, you can check all the keys and how they carry out specific task depending on the type of application you are running. Most applications will tell on their manuals and guides how these functions keys are used in the applications.

Generally, functions keys will greatly benefit you if you know how to use them well. More on computer keyboard shortcuts...

Numeric keypad is the other part of computer keyboard. Usually, it is located at the right side of a keyboard. It is arranged like a standard calculator used to enter numerical data.

These are keys found between the typing keypad and the numeric keypad. It has two groups of keys, arranged top and bottom.

Insert key switches between insert and overtype modes. Home key brings you back at the beginning of a page. Page Up and Page Down keys help you to move one page or screen up or down. Delete key erases a text or page. The End key takes you at the end of a page.

The bottom keys are independent directional keys, which let you to move the cursor Left, Right, Up and Down. Status lights, Escape key, Print Screen/SysRq, Scroll Lock, Pause/Break are user for frequent functions.

For example, if you press the Caps Lock on the typing keypad, the Caps Lock Status light tells you that is on and can type Capital letters. You press Print Screen key if you want to save the current Window as an image.

These are the parts found in standard computer keyboard and mostly used in desktop computers. Laptop and Notebook keyboard types are more compact, but recently we are beginning to see laptops that have dedicated numeric keypads as well.

Other than the above parts, some keyboards incorporate additional buttons. These buttons used to activate actions such as music buttons (play, pause, forward, rewind, stop and mute), Bluetooth, e-mail and so on.

How keyboard connects to a computer?

Computer Keyboard can connect with a computer through a cable or signal (wireless connection). Until recently, a keyboard connects with the standard PS/2 type or Serial.

Now this trend is changed and the connection is replaced by USB (universal serial bus) and wireless connectors. Most modern PCs (motherboards) even don’t have PS/2 connectors, only USB.

In summary, computer keyboard is an input device that can’t be escaped. When you buy keyboards go for the known and best brand types, otherwise it will soon fail to operate.