Computer network components include the major parts that are needed to install a network both at the office and home level. Before delving into the installation process, you should be familiar with each part so that you could choose and buy the right component that fits with your network system.

These hardware components include cable, Hub, Switch, NIC (network interface card), modem and router. Depending on the type of network you are going to install, some of the parts can be eliminated. For example, in a wireless network you don’t need cables, hubs so on.

Computer network is a group of two or more computers that connect with each other to share a resource. Sharing of devices and resources is the purpose of computer network. You can share printers, fax machines, scanners, network connection, local drives, copiers and other resources.

In computer network technology, there are several types of networks that range from simple to complex level. However, in any case in order to connect computers with each other or to the existing network or planning to install from scratch, the required devices and rules (protocols) are mostly the same.

Ok, let us go and see each component in detail… 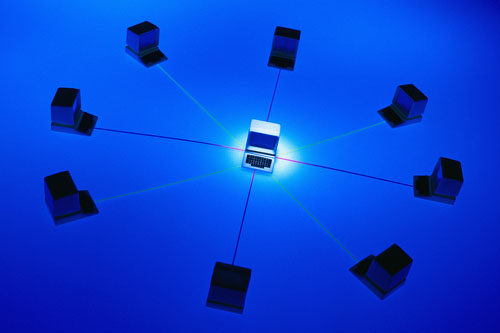 Computer network requires the following devices (some of them are optional):-

Network adapter is a device that enables a computer to talk with other computer/network. Using unique hardware addresses (MAC address) encoded on the card chip, the data-link protocol employs these addresses to discover other systems on the network so that it can transfer data to the right destination.

There are two types of network cards: wired and wireless. The wired NIC uses cables and connectors as a medium to transfer data, whereas in the wireless card, the connection is made using antenna that employs radio wave technology. All modern laptop computers incorporated wireless NIC in addition to the wired adapter.

Network Interface card, one of the main computer network components, comes with different speeds, 10Mbps, 100Mbps, and 1000Mbps, so on. Recent standard network cards built with Gigabit (1000Mbps) connection speed. It also supports to connect slower speeds such as 10Mbps and 100Mbps. However, the speed of the card depends on your LAN speed.

For example, if you have a switch that supports up to 100Mbps, your NIC will also transfer a data with this same speed even though your computer NIC has still the capability to transfer data at 1000Mbps (1Gbps). In modern computers, network adapter is integrated with a computer motherboard. However if you want advanced and fast Ethernet card, you may buy and install on your computer using the PCI slot found on the motherboard (desktop) and ExpressCard slots on laptop .

Hub is a device that splits a network connection into multiple computers. It is like a distribution center. When a computer request information from a network or a specific computer, it sends the request to the hub through a cable. The hub will receive the request and transmit it to the entire network. Each computer in the network should then figure out whether the broadcast data is for them or not.

Currently Hubs are becoming obsolete and replaced by more advanced communication devices such as Switchs and Routers.

Switch is a telecommunication device grouped as one of computer network components. Switch is like a Hub but built in with advanced features. It uses physical device addresses in each incoming messages so that it can deliver the message to the right destination or port.

Like Hub, switch don’t broadcast the received message to entire network, rather before sending it checks to which system or port should the message be sent. In other words switch connects the source and destination directly which increases the speed of the network. Both switch and hub have common features: Multiple RJ-45 ports, power supply and connection lights.

Cable is one way of transmission media which can transmit communication signals. The wired network typology uses special type of cable to connect computers on a network.

There are a number of solid transmission Media types, which are listed below. - Twisted pair wire

It is a high-speed cable which transmits data using light beams through a glass bound fibers. Fiber-optic cable is high data transmission cable comparing to the other cable types. But the cost of fiber optics is very expensive which can only be purchased and installed on governmental level.

When we talk about computer network components, the other device that used to connect a LAN with an internet connection is called Router. When you have two distinct networks (LANs) or want to share a single internet connection to multiple computers, we use a Router.

In most cases, recent routers also include a switch which in other words can be used as a switch. You don’t need to buy both switch and router, particularly if you are installing small business and home networks.

There are two types of Router: wired and wireless. The choice depends on your physical office/home setting, speed and cost.

A modem enables you to connect your computer to the available internet connection over the existing telephone line. Like NIC, Modem is not integrated with a computer motherboard. It comes as separate part which can be installed on the PCI slots found on motherboard.

A modem is not necessary for LAN, but required for internet connection such as dial-up and DSL.

There are some types of modems, which differs in speed and transmission rate. Standard PC modem or Dial-up modems (56Kb data transmission speed), Cellular modem (used in a laptop that enables to connect while on the go), cable modem (500 times faster than standard modem) and DSL Modems are the most popular.

Whether you want to install a network at your office or home, these are the required computer network components you need. Though, depends on your situation some of the devices can be disregarded. For home network using a Router is suitable since it also bundles a switch.